Stop Playing the Water Heater Age Guessing Game in Conroe, TX and Beyond!

Our Conroe plumbers hope this information helps take some of the guesswork out of determining water heater ages! For water heater repairs, water heater installations, or any other plumbing service  in or around Conroe, Tomball, Klein, or Cy-Fair, give Rooter-Man a call!

Coupons
Our Services
About the Company 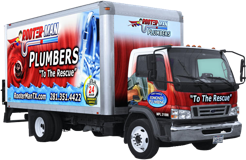